Me: A Broadway Young’un, Plus a Few Days and One Tony-Winning Show

Dirty Rotten Scoundrels had just opened on Broadway in March 2005, a few months before my sister Sarah and I wandered into the Imperial Theatre box office and walked out with cheap nose-bleed section seats. Neither one of us had seen the original 1988 film with Michael Caine and Steve Martin, but we knew John Lithgow and remembered Norbert Leo Butz from our worn-out copy of the Wicked Original Broadway Cast album. Sarah and I also remembered Sherie Rene Scott from Aida, and I also smugly informed Sarah, “Oh, I know Joanna Gleason. She was the original Baker’s Wife in Into the Woods, m-yes, m-yes, m-yes…” *Cue monocle* “And I saw the Tony Awards, and I believe Norbert Leo Butz won the Tony, m-yes, m-yes…” (Oh, I was QUITE the proud theatre nerd.)

Here are a few things I didn’t know about Dirty Rotten Scoundrels. For one, the music and lyrics were written by David Yazbek, a man who bragged in his bio about writing the theme song to Where in the World is Carmen Sandiego? (Granted, I cannot blame him. It is a great song!) It was also the Broadway debut for writer Jeffrey Lane who is probably best known for his work on TV’s Mad About You and Ryan’s Hope. To date, he has only written the book for one other Broadway musical, 2010’s talent bomb Women on the Verge of a Nervous Breakdown.

We caught a matinee of the show, and with one exception, we saw the original Broadway principal cast. Sara Gettelfinger was still in the cast, but she wasn’t playing the matinee that day. Principal actors who were not members of the original cast are in bold.

This was a notable show in my theatre education in that it was the first show I saw with big-name stars. It was the first time I remember hearing an audience applaud when a cast member just walked on-stage, which was strange and kind of fun. Memory is probably exaggerating the experience, but I remember my sister and I cheering, “Yeah, woo! Loved you in Third Rock from the Sun, woo-hoo!”

Dirty Rotten Scoundrels was a fun show that was probably elevated by the cast. Lithgow was charming as the smooth-talking Jameson, and I remember being stunned by the sheer amount of energy in Norbert Leo Butz. His performance of “Great Big Stuff” was really fantastic. “Oh my God, this thing turns?!?”

(Also see his performance in Catch Me If You Can.)

Getting to see such amazing stage performers like Sherie Rene Scott (multiple Tony nominee), Joanna Gleason (Tony Award winner), and Gregory Jbara (future Tony Award winner for Billy Elliot) all together in one show was mind-blowing for me. I do enjoy the soundtrack too, and I still give it a listen from time to time.

We didn’t get our Playbills signed at the stage door. Instead, we went to a signing at Tower Records on Thursday, June 23. 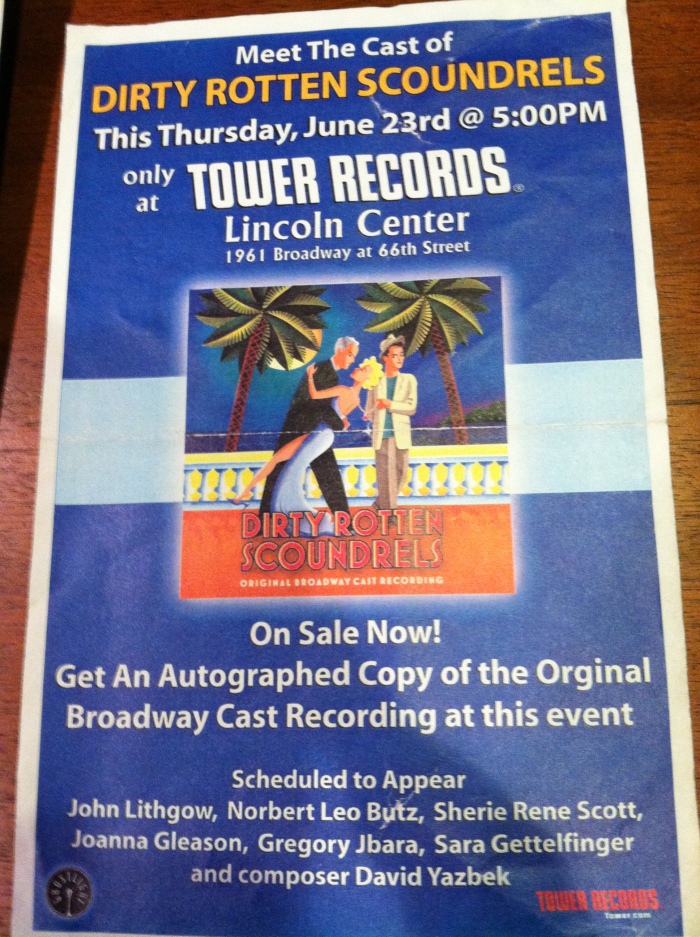 Meeting Gregory Jbara was one of the most memorable moments of the trip for Sarah and myself. He stopped and chatted with us before taking the picture, and I was just shocked at how nice he was. Later that summer, he even shared our picture on his website, which you can still see here. (And yes, I know she typed “too” when she meant “two.” She’s very smart, and typos can happen to anyone!)

Inside the Playbill, it is the same news stories as last time, but I figured I’d share a few more pages from the inside. 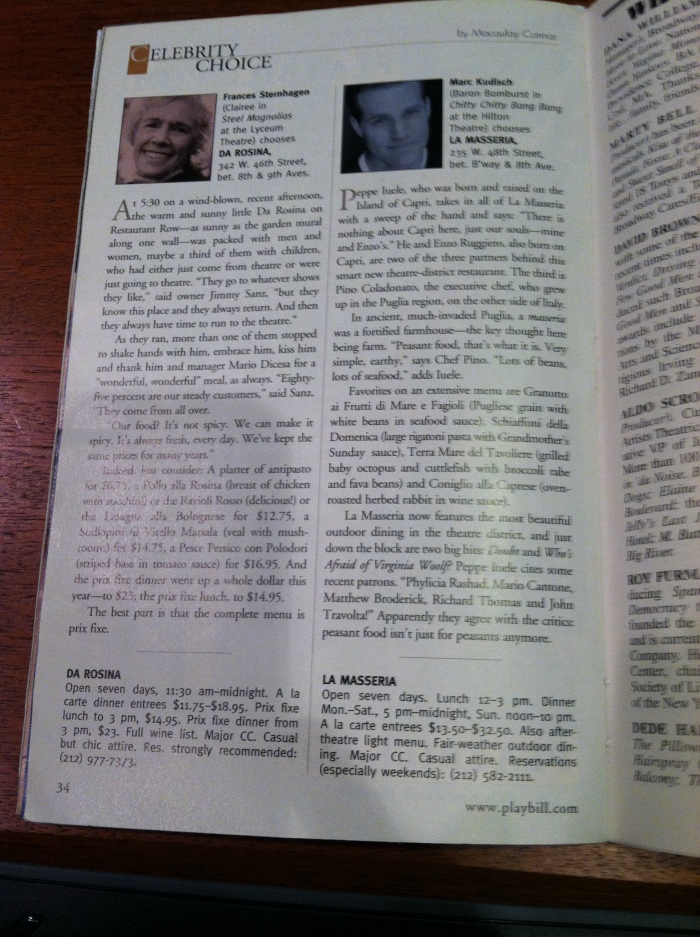 And another page about Sweet Charity with Christina Applegate and Denis O’Hare.