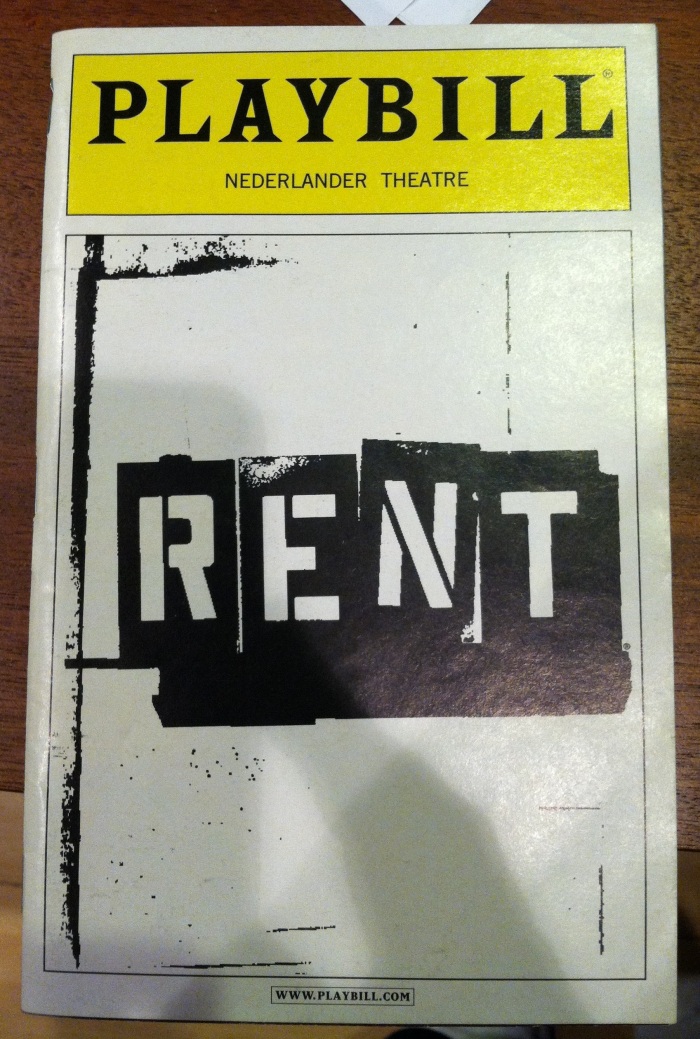 The Show: Rent – Book, Music, and Lyrics by Jonathan Larson

Me: Star-Eyed Young’un, Still Pinching Myself After Seeing Two (One, Two!) Tony-Winning Shows

Rent was, for lack of a better word, the “cool” musical of my teen years. The characters were these starving young artists living in New York, going down to the Life Café and singing rock songs about the bohemian life. There were gay, lesbian, and bisexual characters as well as a racially diverse cast, and they struggled with modern day issues like drug addiction and AIDS. I had never seen anything like it before, and it only encouraged my dream of moving to New York.

The original Broadway cast of Rent is full of actors who have gone on to become some of Broadway’s biggest stars including Adam Pascal (Aida), Anthony Rapp (You’re a Good Man Charlie Brown), and Idina Menzel (Wicked, If/Then). Jonathan Larson, the show’s writer, composer, and lyricist, tragically died on the night before the show’s off-Broadway premiere at the New York Theatre Workshop, and he never got to see the show’s tremendous success.

After the show’s off-Broadway run, Rent premiered on Broadway in 1996 at the Nederlander Theatre and ran through September 7, 2008, a full three years after I saw the show on Broadway. In the years from the Broadway premiere to the summer of 2005, the cast obviously changed quite a bit, and when I saw the show, none of the original principal actors remained. Here is the original Broadway cast and the cast from the summer of 2005.

Before seeing Rent, I had listened to the soundtrack more times than I can remember, and the full two-disc soundtrack contained almost the entire show, so I had a pretty good idea what I was getting into. Even with that prior knowledge, though, it was a really amazing experience to see Rent on-stage and see the artsy world of 1990s East Village come to life.

Time hasn’t been entirely kind to Rent. Some critics have suggested that the show’s early praise and Pulitzer Prize win were perhaps undeserved. (I won’t link to these articles because I would rather not give them additional traffic, but these critics are easy to find with a quick Google search.) To those critics, I would say that it is easy to forget how much culture has progressed since the early 1990s in regards to LGBT rights and HIV/AIDS awareness. At the time, not very many people were writing LGBT characters. Rent premiered on Broadway only nine years after Ronald Reagan publicly acknowledged AIDS in a speech. Considering at its racially diverse cast, Rent is still progressive when compared to other shows currently on Broadway.

It is easy to sit back and criticize the show’s messages when people can live full and happy lives with HIV and marriage equality is available in nineteen states, but I would guess that a lot of that progress can be traced back to kids listening to Rent during their formative years. They grew to love these characters, and they sought out other books, films, and plays centered on LGBT issues. Maybe some of these young people started writing their stories or songs, and they changed culture’s perception of LGBT people and the issues affecting them. To minimize the importance of Rent in theater culture and pop culture as a whole is incredibly small-minded, and it disappoints me that any knowledgeable critic would entertain this notion.

There is a convenient flow-chart in the Playbill which explains the relationships between all the main characters. I’ve included a picture of the chart below.