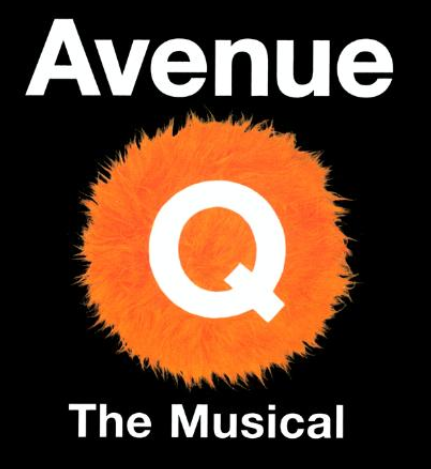 Me: A Broadway Young’un, Just Cutting My Teeth on New York Theatre

I saw Avenue Q during the summer after my senior year of high school. My family took a trip out to New York, and while I was in the city, I made a point to see as many shows as possible.

I had only visited New York City once before that family vacation. My high school choir had visited the city during my junior year, and the only shows I had the opportunity to see were Thoroughly Modern Millie and The Lion King which were arranged by my school’s choir department.

My first show was Avenue Q at the Golden Theatre, located on West 45th Street between Broadway and 8th Avenue. Currently, the play Mothers and Sons is playing at the Golden Theatre, and other recent notable productions were The Normal Heart, Seminar, and The Anarchist. One of those shows will be the subject of an upcoming blog. (Take a guess at which show in the comments section!) I was accompanied by my older sister Sarah, and hilariously enough, we almost missed the show entirely when we mistook the show time for 8:00 instead of 7:00. This mistake resulted in us sprinting approximately 5 city blocks to get to the theater in time.

Going into the show, I had heard about some of the backlash after the Tony Awards when they opted for a Vegas show in lieu of a national tour. While I was only able to find a few of the slogans from their Tony campaign (“Vote with your Heart,” “Don’t Suck, Vote Q”), I also remember some not-so-nice slogans from the campaign that were specifically targeting their competition. I will continue hunting for evidence of proving that I’m remembering it correctly, and I encourage anyone who has news stories or evidence to leave a comment below. To be honest, even the “Don’t Suck” slogan is kind of mean. Does it mean that a Tony voter would have sucked if they voted for The Boy from Oz, Caroline, or Change, or the big dog of the race, Wicked? After seeing their Tony Awards campaign, I was a worried that the show would be a bit too snarky and mean for my taste, and it would probably make me laugh but wouldn’t connect with me emotionally.

As I mentioned before, this was the first Broadway show that I chose to see, as opposed to the shows picked by chaperones and trip planners for our high school trip, and I’m so glad that I chose it. Whatever mean vibes I might have felt with the Tony campaign, they are absolutely not present in Avenue Q. On the surface, it is a funny little show that curses a lot, but the relationships between Princeton/Kate and Rod/Nicky are real and sweet and sometimes heartbreaking. Like the best of the Muppets, Avenue Q made me forget that these are puppeteers and characters made out of felt, and I connected with their struggle to make ends meet and find their purpose in life.

Thoroughly Modern Millie and The Lion King were fine shows, but Avenue Q opened my young mind to Broadway shows that are smaller scale, more intimate but still fantastically creative. This is also around the time that I really started following Broadway composers and actors. I was aware of composers like Rodgers and Hammerstein, Andrew Lloyd Webber, and Stephen Sondheim, and I knew actresses like Kristin Chenoweth. After Avenue Q, I started following the career of Robert Lopez, recent EGOT winner, and I was so excited to recognize Stephanie D’Abruzzo in the Scrubs musical episode.

Some other quick notes about this Playbill:

Some shows of note from the Playbill are Raul Esparza in Chitty Chitty Bang Bang, Celia Keenan Bolger in The Light in the Piazza, Christina Applegate and Denis O’Hare in Sweet Charity, Kate Burton in The Constant Wife, and Harvey Fierstein in Fiddler on the Roof. 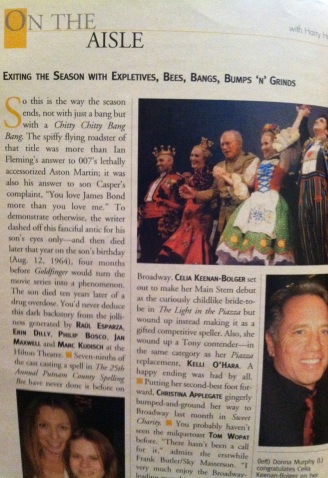