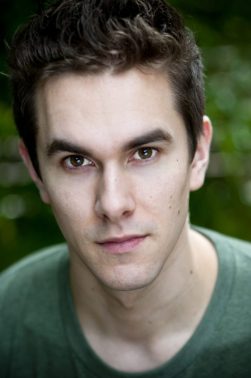 Read on for part 3 of my interview with Colin Waitt (and check out part 1 and part 2 here), where we chat more about theatre and podcasting, his upcoming projects (including Puffs, coming to Elektra Theatre this fall!), and his advice for aspiring playwrights and producers. (Also, episode 1 is now available for download here, so catch up before seeing episode 2 on September 12!)

What other projects do you have coming up this year? Obviously, you’re very busy with From Cold Lake.

So I’m one of the original producers of Puffs and now eagerly awaiting our off-Broadway transfer. It’s been really gratifying, like, insanely gratifying. I think it’s kind of incredible and amazing that we’ve all been slogging away at our lives, and it’s a parody play that is the thing that is really putting us on the map, and that’s so exciting and so wonderful that this love that we have for this other thing is enabling us to move forward in our careers.

I also produce Serials at the Flea Theater, so that’s late-night craziness that is every other month, and it’s fun because it’s a lot of emerging creatives, and it’s kind of crazy, and people getting to do stuff that’s a little bit weird and wild because it happens at eleven o’clock at night.

But yeah, mostly From Cold Lake. Oh, god. It’s the most exciting and terrifying challenge that we’ve set up for ourselves, and for me as a writer, it’s insane because I try to have the next month’s episode at least in a rough enough draft that all it needs is just a few tweaks.

How much do you have written of the other parts?

So there is a complete show bible that has been written, and I’ve tracked out the trajectories. I say there aren’t main characters, but there are characters that are going to be in every episode or most of the episodes, and it’s kind of ended up focusing on the Schmidt Family Hour, the two sisters, their brother, and the husband and son – they’re kind of the main thrust, as well as Linda Klaver and the Mayor. So all of their arcs are mapped out, which is crazy. I have October pretty much done. It’s just a matter of tweaking and polishing and smoothing out, and November is plotted out, December is plotted out, January is plotted out, and that’s crazy because it’s also this sort of thing where knowing where it ends up, you know what sort of needs to be planted earlier on. I also wanted to make sure Tommy knew so that thematically with the music, if there were things that he wanted to develop throughout, he could.

Are you releasing the show as a podcast?

Matt Cox is mixing it. Matt is amazing with sound mixing in addition to being hilarious and being a great writer, so he’s mixing it right now.

Do you think that after From Cold Lake that you could see yourself doing more podcasts?

I would love to. I have ideas for all sorts of things I’d like to do. Early this year, I wrote an immersive pod-play for the New York City subway. It was a theatre company called This Is Not A Theatre Company that recorded them. We also do this play that is set in an apartment and is immersive and is super cool, but Erin, who is the artistic director, commissioned three of us to write pod-plays, one for the L train – which I wrote – and there is one for the N and one for the 7. So people can download and listen to it in one direction, they get off, and they listen on the way back. It’s always the same, but it’s written so that it could happen any time of the day, so radio has been very much in my mind, which is also part of why I like From Cold Lake. I like it for the same reason I like reading books because since you can picture everything, you get to have everything much more richly imagined than you do even in a very simple staging. I like that, filling in the blanks. It’s exciting.

What advice would you give to aspiring writers and producers who are thinking about coming to New York and working in theatre?

Be bold and be brave. I have been told no so many times in my life, and then I moved to New York, and I have been told no so many times more. You just have to figure out what you’re good at and trust that just by doing it, by focusing on continuing to improve what you do that eventually, someone else will notice. But know that there’s going to be no one lining up to see you in the short term. When you get here, they’re not going to care. It takes time.

It’s really been fascinating to – even like our creative unit just by luck happened to form because we happened to be in the same place at the same time and interested in the same sort of things. We feel like with Puffs, for example, we’ve got this little pebble that we found that we’re just clutching it close to our chests. This is ours, and we want it to be the best it can be, and it’s like a tiny little thing. All we feel like we can do is make what we do the best thing that it can possibly be, and that’s really all we have control over, and we obviously tell people to see it and hope for the best.