I’ve been reflecting back on the past year in New York City theatre, compiling my favorite shows, performances, and moments on (and off) Broadway. That recap will be coming soon, but first, there are a few moments that need to called out for the wrong reasons. From bad casting and lazy artistry to undervaluing the great people who make theatre happen, here are some of Broadway’s lowest points in 2015.

Technically, the LucasFilm animated flop wasn’t “Broadway” per se, but it was a new musical loosely based on Shakespeare’s A Midsummer Night’s Dream and starred several top Broadway stars. At the same time that Alan Cumming and Kristin Chenoweth were starring in Strange Magic, they were also headlining Cabaret at Studio 54 and On the Twentieth Century at the American Airlines Theatre. It is a shame that Strange Magic wasted these two incredible talents on such mediocre drivel. I felt embarrassed, especially because it was clear that they were fighting to elevate the material, but there was no way to fix the gross rape-y plot, childish humor, and inane dialogue. 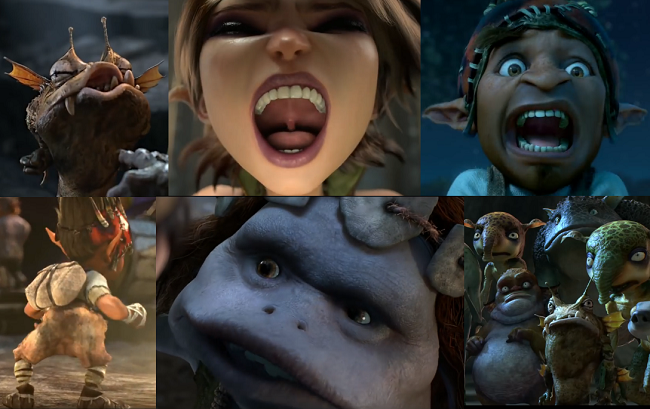 George Lucas claimed that Strange Magic was meant for girls the way that Star Wars was meant for boys. Speaking as a girl, we deserve better musicals than that, or at least one with an original soundtrack. There are plenty of good jukebox musicals, but wow, Strange Magic is one of the laziest and least creative that I’ve ever seen.

Example, this Shrek copy-cat nonsense. Strange, but definitely not magical.

There isn’t much I can say that hasn’t already been said better by Chris Peterson of On Stage and Aileen McKenna of The Craptacular. All I will add is that his casting and the response (or lack of response) from the Broadway community prove that we have a long way to go in valuing and protecting women in theatre.

The Broadway League and #Dim4Kyle

On July 23, 2015, Kyle Jean-Baptiste stepped onto the stage of the Imperial Theatre and made history as the first African-American actor and the youngest actor to play the role of Jean Valjean in Les Miserables on Broadway. He was a rising star in the New York City theatre community, which made his sudden death on August 29 (a little over a month later) all the more tragic.

When there is a prominent death in the Broadway community, the Broadway League will often dim the lights on the theatre marquees to pay tribute to that artist and their work. Many people expected that the lights would be dimmed for Kyle Jean-Baptiste, particularly considering the historical significance of his role in Les Miserables. Unfortunately, the Broadway League voted against it, and the League’s president Charlotte St. Martin commented, “You have to look at the people who have been honored, and you see that it by no means includes everybody. It’s people who have spent a lifetime in the theater.”

From a sister to her best friend + brother. Happy birthday bro! I love you and miss you. Keep shining in heaven 💜RIP pic.twitter.com/94RbVMHB30

That isn’t exactly the best choice of words under the circumstances, “people who have spent a lifetime in the theater.” Kyle Jean-Baptiste was young, only 21 years old, but he made the most of his short life. He made his mark on Broadway, and I can only imagine what else he might have accomplished if given more time.

Tony Awards: Botching In Memoriam Segment, Larry David’s Rant, Pushing More Awards Out of the Broadcast, and Why The F—- Are The Jersey Boys Here?

What was going on at the Tony Awards? It was a historic night with big wins for women (Fun Home), the LGBT community (Fun Home, Hedwig), the autistic community (The Curious Incident of the Dog in the Night-Time), and actresses of Asian descent (Ruthie Ann Miles for The King and I), and still, people involved with the broadcast managed to muck it up in dumbfounding ways.

First up, there was the In Memoriam segment. In the previous year, the segment had been pushed out of the broadcast altogether to one of the commercial breaks, much to the dismay of many industry professionals. The In Memoriam segment at the 2015 ceremony was aired with a special performance of “You’ll Never Walk Alone” by Josh Groban. Unfortunately, of the 4 minutes and 25 seconds segment, only 1 minute and 37 seconds was actually dedicated to the 42 talented individuals who were honored for their contribution to the Broadway community:

Jayne Meadows Allen: Actor, seven Broadway plays, including the 1978 revival of Once in a Lifetime, The Gazebo, and Another Love Story

Stanley Chase: Producer, special Tony Award winner in 1956 for his work on Threepenny Opera and an additional Tony Award nomination for The Potting Shed

Ruby Dee: Actor, eight Broadway credits, including the original cast of A Raisin in the Sun, Checkmates with Denzel Washington, and A Long Way From Home

Eugene Louis ‘Luigi’ Faccuito: Choreographer and Jazz Dancer, performer in Happy Hunting and assistant to the choreographer in Whoop-Up and Let It Ride!

Carole L. Haber: Producer, six-time Tony Award nominee for Jerusalem, Evita, Nice Work if You Can Get It, and An American in Paris

Robert H. Livingston: Writer/Director, two-time Tony Award nominee for The Me Nobody Knows for Best Book and Direction of a Musical

Brian MacDonald: Director/Producer/Choreographer, two-time Tony Award nominee for The Mikado for Best Choreography and Direction of a Musical

Mike Nichols: Director/Producer, eighteen-time Tony Award nominee with ten wins, including Barefoot in the Park, The Odd Couple, Annie, Spamalot, and 2012’s Death of a Salesman with Philip Seymour Hoffman

Joan Rivers: Performer/Writer, Tony Award nominee for her role in Sally Marr…and her escorts, which she also wrote

Mary Rodgers: Composer, two-time Tony Award nominee for Once Upon a Mattress and Working

Donald Saddler: Choreographer/Director, four-time Tony Award nominee and two-time winner of Best Choreography for Wonderful Town and No, No, Nanette

Herb Schapiro: Writer/Lyricist, Tony Award nominee for Best Book of a Musical for The Me Nobody Knows

Andrea “Spook” Testani: Stage Manager, ten Broadway shows including I Am My Own Wife, The 25th Annual Putnam County Spelling Bee, and Match

Jay Thompson: Writer/Composer/Lyricist, Tony Award nominee for Once Upon a Mattress

With only 1 minute and 37 seconds, that meant less than 2.5 seconds was dedicated to each individual. Collectively, these individuals account for 83 Tony Awards nominations and countless Broadway credits. To spend so little time on their lives and accomplishments is really quite pitiful.

Speaking of pitiful, a number of major awards were pushed out of the televised ceremony altogether, including John Cameron Mitchell’s special Tony Award for Hedwig and the Angry Inch, Lisa Kron’s award for Best Book of a Musical for Fun Home, and Jeanine Tesori and Lisa Kron’s award for Best Original Score Written for the Theatre. Supposedly, these cuts were made to shorten the ceremony’s running time, and yet, there was still time for the Jersey Boys to cut off Fun Home’s acceptance speech (ENOUGH with “Oh, What A Night,” for crying out loud!) and Larry David’s obnoxious attention-grabbing rant. Some people found David’s jokes hilarious, but he came off as self-serving and immature, bringing up anti-Semitism when the first all-women writing team to win a Tony Award had their speeches cut out of the broadcast.

One thought on “The Year In Recap: Broadway’s Lowest Points Of 2015”