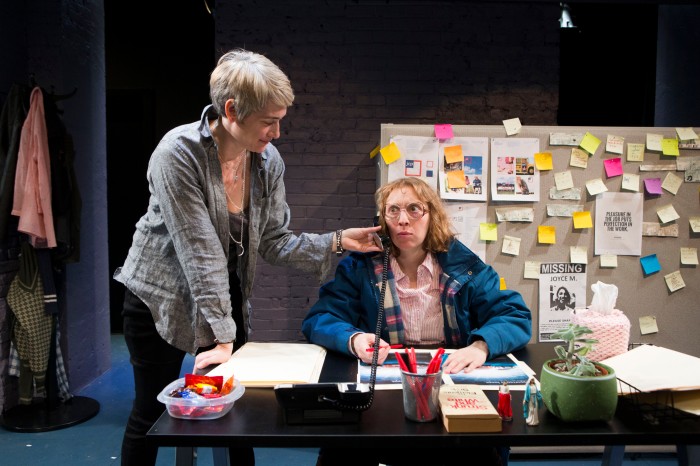 Washed Up on the Potomac, now playing at the Flea Theater’s new Tribeca home, is a dark workplace comedy set in the proofreading office of an ad agency (or possibly purgatory, depending on your interpretation). The show opens with a proofreading disaster in the office, a very obvious and costly mistake on an iPod ad, and the boss is looking for a scapegoat. There is the harried and mousy Sherri (Crystal Finn), who is dominated by her religious fundamentalist mother; Kate (Jennifer Morris), a wannabe rocker who won a songwriting contest at a young age but lost her momentum due to a family tragedy; Mark (Adam Green), a novelist who is so critical of his work that he rewrites the same passage again and again and never finishes anything; and Giorgio (Debargo Sanyal), the office’s self-serious manager who wishes everyone would act a little more professionally.

In addition to the iPod mistake, the office is grappling with the news that the body of Joyce, one of their former coworkers, might have been recent found, washed up on the Potomac. (“Hey, that’s the name of the show!”) Everyone is convinced that it is Joyce, except for Sherri. Sherri needs to believe that Joyce escaped from an ordinary life, and she is drinking coffee at a cafe in Paris or having some other extraordinary adventure. It is unlikely, but she clings to hope regardless. 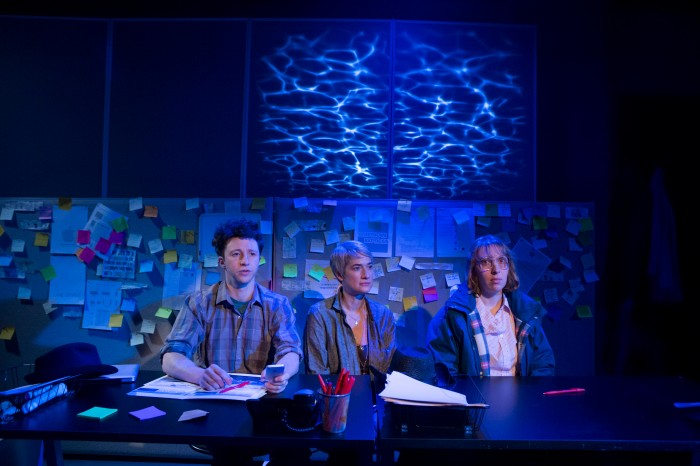 There isn’t much that happens in Washed Up on the Potomac. Kate plays a few songs at a local bar, Mark opens up about his feelings for Kate, and Sherri makes a decision that takes everyone by surprise. It is compelling because of the characters. They are familiar and uncomfortable for anyone who says they’re a writer but never finished a book, or they want something more in life but somehow never got started. They are stuck because they are too worried about disappointing a parent or themselves. They don’t take the risk because deep down, they know that their work is mediocre (or in the case of Sherri, that she is mediocre), and they don’t think they have the time or ability to get better. Ouch.

Washed Up on the Potomac won me over with its dark humor and focus on complex, flawed characters like Sherri and Kate. It isn’t the easiest show to watch, but from beginning to end, I couldn’t look away.

Washed Up on the Potomac is running at the Flea Theater’s new Tribeca home (located at 20 Thomas Street), thru December 16. General admission tickets are $25, reserved seats are $35, and a “Pool Pass” including tickets for Washed Up on the Potomac, Tania in the Getaway Van, and The Rafa Play is $60. Tickets can be purchased in advance online via The Flea Theater and The Pool websites or by calling 212-352-3101.