Room 4, a new satire about black stereotypes in entertainment, is currently running at the PIT. Described as a mix of Groundhog Day, Waiting for Godot, and A Chorus Line, this comedy follows four black actors as they audition for the same role as an anonymous drug dealer’s friend in a certain prime-time crime drama. Unfortunately, this time, it doesn’t just feel like the same role, but it is the same role. The four actors are stuck in a time loop, and they will have to work together to break out of it.

I sat down with the cast of Room 4 the day before their opening night to talk about frustrating casting calls and unpacking harmful tropes and stereotypes with humor.

Tell me a little bit about yourself, how you got into acting and how you ended up in New York City.

Could you explain a little bit about what Room 4 is and what your role is in the show?

Sure, sure. So my character is Alan, and he starts the play off – he actually sets the tone for it. I would say, from my experience, Alan is an actor who gets the least amount of work out of everybody, but he keeps plugging away. He’s optimistic about it, not that he’s not aware of all the things we face as black actors or anything like that. He’s still aware of that, and it very much is a frustration for him, but yeah, I would say that he’s the one who is least successful out of everyone else. That gives him kind of an air of desperation, but he’s a little hungrier. And you also asked what Room 4 is about?

So the play is about four male black actors. We’re all auditioning for the part of “Anonymous Drug Dealer’s Friend,” and we all go into the play just as any other ordinary audition day. We don’t assume that anything is wrong with it, and then all of a sudden, things get a little bit metaphysical, weird, and magical, kind of quantum physics based weirdness. I guess in a way, it’s almost like time and space, all those metaphysical things force us to look at our careers and how it shaped us, how we actually really feel about the fact that we are stuck in these tropes and stuck having to serve these tropes and why, where we’ve lost our artistry and our purpose behind it.

I was chatting with some of the other guys about having to work, having to eat, and the parts that you’re given. Have you found that you’ve had that struggle in your career?

I mean, it’s funny because when we’re not working with people that we know and we trust, I find that’s what happens a lot of times. I guess it’s kind of more of a commentary on how art in general is being made now. It’s more of a collaborative effort that really helps those who aren’t exposed enough or those who don’t have the connections. It’s really that impulse to create your own work and to do something creatively that will get you seen, and I find that when I do more work geared towards that with people that I know, with ensembles that I know that don’t fall into that.

I don’t have to, but when I’m going for stuff outside of that, even my body kind of reacts to it. Like, I kind of get, “Oh, what are they looking for? Are they looking for this?” And then I’m like, “Wait, why do I care? If they want me, they want me.” I almost kind of have to remember not to be tricked by it. It’s like, you know, when you want to do stuff that is successful and gives you money, those roles that pay well, yeah. I tend to get those, and that sucks. 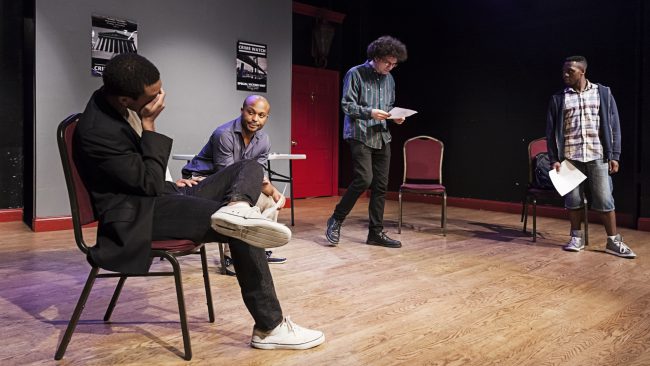 What was the rehearsal process like for the show, and what was it like working with Marina and Nicco?

Oh, it was great. This is my third or fourth project with Marina and Nicco, so I have a really good sense of their vision and what they want to indicate, and so that’s easy. It’s been fun. I worked with some of the gentlemen before on other productions – actually, the previous run of the show – but the two new gentlemen who I’m working with, Eric and Ryan, are great. Their impulses are great.

It’s great to actually see a lot of the moments and give a new freshness to them with the changes that Nicco and Marina have made, so it’s really cool. It’s a completely different play. I mean, a lot of the messages are the same and what they’re attacking and trying to vocalize and give a voice to is pretty much still at the core but is a lot of different moments that definitely shape and give a different insight than when we previously had.

Do you think it’s having new blood in the cast that maybe shapes the script or changes how it’s played?

Yeah, yeah, I do, and I think this is a testament to Marina and Nicco and how they allow us to own some of these moments along with what they’ve written, which is brilliant stuff, and whatever impetus we get during the rehearsal process, they are very willing to let us play it out, see how far it goes. If it goes too far, obviously they will reel us in, but there are a lot of moments in here that are completely just improv-ed in and organic. And I think the new guys definitely made a huge impact on that.

What do you hope that people take away from Room 4?

That’s a tough one. I think the most important thing – and I guess this is what I take away from it. We – especially the artists – I want them to take away that you have way more control than you think, and as consumers too, actually. We have more control over what you consume or what you allow to become popular, to invade your daily life. It does affect what gets produced, Even if you can’t see it directly, it does help a lot. I mean, the fact that we’re making issues like this more in the forefront of people’s minds, it’s going to shape how people consume art later and how people interact with art and theatre and film, and I think that’s an important thing to be conscious of, what you’re consuming and what you are allowing into your mind space.

And I think things like YouTube and these streaming services and of course the accessibility to equipment to be able to produce content like this. The fact that a feature film was filmed on an iPhone 6 last year, that says it all right there.

And Apple is not sad about that! They’re like, yes, and don’t forget we’re coming out with the 7 next year! But yeah, you’re absolutely right. It’s a good point.

Do you have any other projects coming up that you’d like to plug?

Yes! I am in a production of Romeo & Juliet that will be going on in Brooklyn in Bushwick in a café setting, and just to give you an idea, it’s like an influence from the 1940s and New Orleans-style, so it’s going to be live jazz and swing dancing, and it’s going to be really cool. (Tickets are still available thru October 2!)

Yeah, definitely. It’s happening at the same time as Room 4.

Yeah, yeah, it’s a lot! But it’s great, it’s great, and it’s interesting, you know, having those cultural aspects interact with each other, going from one rehearsal to another and seeing how that affects my understanding of Romeo and his character in that setting. It’s interesting, and I think that actually changed how I did both plays, which I didn’t expect.

Very cool. Well, thank you for sitting down with me today.

Thank you so much.

Tickets are on sale now for Room 4 and can be purchased online here at ThePIT-NYC.com or in-person at the PIT, located at 123 E 24th St. For other questions or assistance with ticket purchases, call the PIT at 212-563-7488.