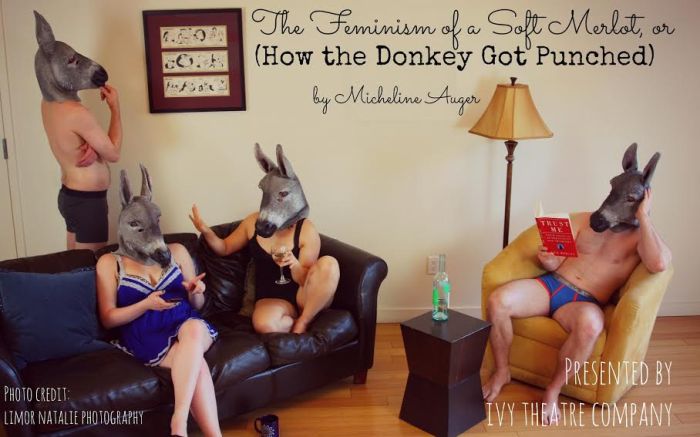 Ivy Theatre Company’s new play The Feminism of a Soft Merlot, or (How the Donkey Got Punched), directed by Audrey Alford and written by Micheline Auger, is a sharp, hilarious dark comedy exploring the fine line between female sexual exploration and exploitation. Kareena (Diana Oh) is trying to help her best friend Sam (Lauren Dortch-Crozier) get over her last boyfriend (and the love of her life) by setting her up with Kyle (Justin Anselmi), a filmmaker that Kareena met through an online dating site. The problem is that Kyle’s films might best be described as pornography, and Sam isn’t sure that she can date a porn director. Kyle’s charisma and sense of humor eventually wins her over, though, and as they spend more time together, Sam finds herself becoming more sexually curious. Meanwhile, Kareena is fighting more often with her boyfriend Teddy (Patrick Daniel Smith) over the future of their relationship. Teddy wants to marry Kareena and settle into monogamous bliss, but Kareena doesn’t know if she wants to marry anyone, much less Teddy.

The central conflict of The Feminism of a Soft Merlot is between Kareena and Sam. At the beginning of the play, Kareena considers herself to be a sexually liberated woman. She has slept with many women and men, and she is comfortable talking about her collection of vibrators. Oddly enough, Kareena is also in a new relationship with a man who wants to settle down and bake delicious chocolate desserts for his lovely monogamous wife. On the completely other end of the spectrum, Sam was ready to settle down with her last boyfriend, and now that he is gone, she is having trouble moving on. Unlike Kareena, Sam is uncomfortable buying sex toys at the Pleasure Chest, and she can’t see herself dating the director of Donkey Punch.

As Kareena dates Teddy and Sam dates Kyle, Kareena is pushed towards monogamy and marital bliss (often against her will), and Sam gets caught up in the sexual freedom that Kyle offers her. Both women, particularly Kareena, struggle with the simplification of female sexuality, Kareena as the supposed “slut,” and Sam as the supposed “prude.” The more that these women are pressured, the more damage this sexual dichotomy causes them. Teddy literally forces an engagement ring onto Kareena, shoving the ring onto her finger just before Sam and Kyle show up for a Christmas party, and when Kareena betrays that engagement, Teddy hurts her in the cruelest possible way. Kyle’s manipulation of Sam is much sneakier. He brings her onto the sets of his porn film shoots, and he subtly encourages her plastic surgery and the plans for her documentary about her sexual discovery which might include her participating in the title “donkey punch.” Kyle explains to Kareena with a sly smile that Sam is very open and he only wants whatever makes her happy, but it is obvious how he is manipulating her and weirdly grooming her to fit into his world.

For all of the interpersonal drama, The Feminism of a Soft Merlot is very, very funny. The dialogue feels natural, and the small cast has terrific chemistry together. The play also never gets preachy about women having as much (or as little) consensual sex as they want without being labeled as a slut or a prude. This is the perfect play to see with good friends and a giant glass of red wine, which is conveniently on sale in the lobby of the Tada Theater, and there will be plenty to discuss after the show, preferably over more giant glasses of wine and chocolate desserts with hot pepper.

The Feminism of a Soft Merlot, or (How the Donkey Got Punched) is playing at the Tada Theater at 15 West 28th Street on the second floor. Tickets can be purchased online at http://ivytheatre.brownpapertickets.com, and tickets are $18 or $15 for students and seniors. Group ticket rates are also available through Audrey Alford at ivytheatre@gmail.com. Ticketholders at special performances will get a free gift bag from the Pleasure Chest. For more information on the Ivy Theatre Company, visit their website at www.ivytheatre.com.

Remaining performances for The Feminism of a Soft Merlot, or (How the Donkey Got Punched) are as follows:

2 thoughts on “The Feminism of a Soft Merlot, or (How the Donkey Got Punched) – Review”